Defend yourself with your random animals 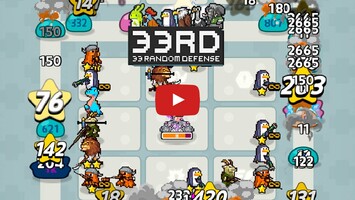 Advertisement
33RD: Random Defense is a strategy game where players have to defend themselves from groups of enemies that appear continuously. This is a random Tower Defense game where you will conjure up nice animals to defend yourself from the enemy monsters.

This game blends the best of Merge games and classic Tower Defense games: you will have to beat various enemy waves that will move around the environment while your troops attack them. Unlike other Tower Defenses, here, there is no final finish line for enemies. Instead, they will continuously circle close to the turrets. You will lose health if a certain minimum number of monsters gather on the screen, so you have to kill them as quickly as possible.

In 33RD, you will never be able to choose the location of your troops- they will just position themselves randomly when you call upon them. But you will be able to use energy gems to move them around, so their position is more beneficial to your defense. However, this is also done randomly, so you might need to pray to the goddess of Luck. Luckily, there is something you can do to improve your strength: if you merge two of the same troops, they will level up.

There are over 100 different levels in the 33RD: Random Defense single-player mode, although pretty soon you'll unlock the most fun game modes: cooperative defense or PvP battles. The game's objective will still be the same, but the number of enemies will increase considerably, so you'll have to choose a good team of animals that complement each other perfectly.

33RD: Random Defense is a fantastic strategy game in the more and more popular Random Defense subgenre. This video game with fantasy visuals uses pixel art to give you a charming character design.
Reviewed by Nelson de Benito Translated by Eloise
Advertisement

There are opinions about 33RD: Random Defense yet. Be the first! Comment

The World of Magic
A magic world full of danger and opportunity
Zenonia 4
An ancient evil threatens the stability of the world
Warspear Online
Dominate the Arinar universe from your cellphone
Arcane Legends
Fantasy roleplay on Android has a new king
ZENONIA 5
The greatest action RPG has returned
AVABEL
Quality massively multiplayer on your Android terminal
Rev Ersi Quest
An interesting mix between RPG and reversi
G.I. JOE: Battleground
Join up with the G.I. Joe or the Cobra in their bloody war

Clash of Clans
Crush enemies and lead your clan to glory
Car Parking Multiplayer
Drive around an extensive map for a realistic parking experience
Clash Royale
Clash of Clans characters face off in epic duels
Bus Simulator Indonesia
Drive a bus through Indonesia with this simulator
Mobile Legends
An excellent, but shameless, League of Legends clone
Vegas Crime Simulator
Try not to get caught breaking the law!
Scary Teacher 3D
Escape the terrifying teacher!
Plants vs. Zombies FREE
The original Plants Vs Zombies, free for the first time

Scanwords in Russian
Block Puzzle Guardian
Merge Hotel Empire
Tiny Room
Explore rooms and solve unique puzzles
Cookie Jam
Destroy the cookies in this sweet match-3
Mafia World: Bloody War
Become the most feared capo in the mafia
Trivia Quiz 2020
A new version of the game show Who Wants To Be A Millionaire?
Rolly Vortex
The ultimate race has arrived to the Android world